Social influencers are rewriting the way we promote goods and services, and it just so happens that the rules to which they play, and post by, are evolving too. In an industry that continues to grow and develop in leaps and bounds, the Australian Association of National Advertisers (AANA) has just implemented new guidelines which all agencies and clients should comply with. This new Best Practice Guidance, which came into effect on March 1, 2017, applies to all social media platforms and every social media user that promotes goods and services. It also covers native advertising and traditional media, including product placement and advertorial.

Last month we delivered the 4-1-1 on what it actually means to be a social media influencer, who’s using them, and how to spot them in the crowd – which is not always easy with no obligation on influencers to identify their post as being an ‘ad’ or ‘sponsored’…Well, until now that is..

These new rules will affect both agencies and influencers, and the contracts put in place when promoting services or products through social media platforms. In this feature blog we break down the new guidelines – looking at what is classified as “sponsored content” and how the laws have the potential to affect your business, your influencers, and of course, the most important aspect of your business – your customers.

To understand sponsored content, we must look to its parent term – native advertising. In the media industry, native advertising is often used synonymously with sponsored content. However, the two terms are not actually synonymous. Distinguishing these two types of forms can be tricky, but we’ll try and make it quick so we can get onto the good stuff.

Native advertising and sponsored content are similar in that they are both paid forms of content, and both tend to fit with their placements’ environments – they can blend in with the look and feel of the websites/platforms on which they reside. But there are distinct differences, and we’ve come up with the following little equations to help make it easier:

Let’s break it down. Essentially, native advertising is promotional in nature – hence the mention of advertising in the name – smart right?! Native advertising aims to convince, rather than inform the audience. While it still looks like an article, there will always be a distinct call-to-action or brand-biased content that contains references to the company. Sponsored content, on the other hand, aims to inform rather than promote and thus is not brand biased. The whole idea around sponsored content is that it leverages the brand as a thought leader so that customers will go to their brand first, instead of their competitors. 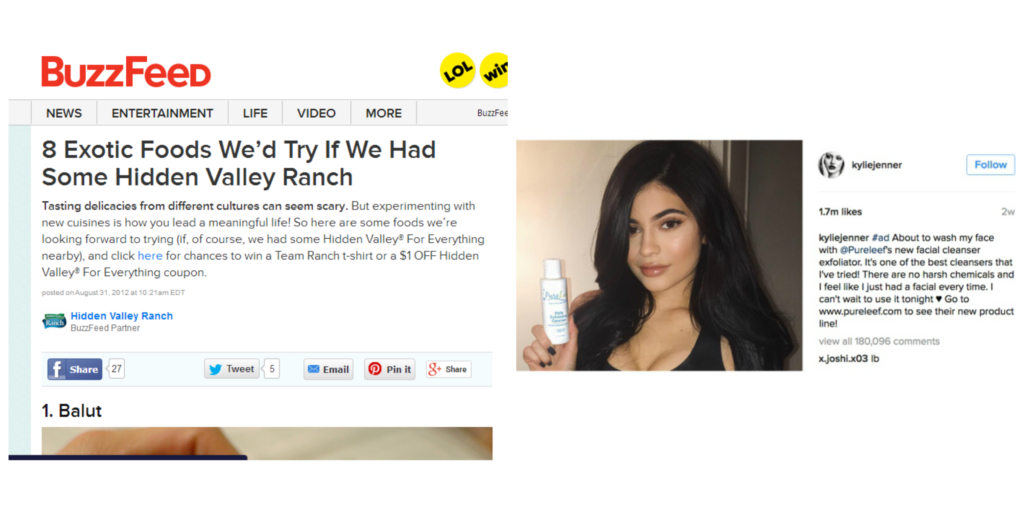 Either way, when we refer to the new guidelines, we’re going to be talking about all forms of paid content advertising. But it’s important to know the difference between something that’s meant to be used to inform, and something that’s purely being used to drive sales.

Now that we’ve cleared that up, we can move on to the new codes and how they apply to paid content.

Let’s get down to business.

What are the laws?

In most cases, we can tell which posts are paid advertisements without them being labeled, so why the change in tune? The AANA is balancing the playing field for brands and its consumers, and catering to those consumers who may not be able to recognise sponsored content. By introducing the labelling of advertisements and sponsored posts, consumers will be made aware that it’s a paid promotion before they click, and can therefore make a more informed decision.

No one likes being an outlaw, so let’s hash out the new rules put in place by the AANA.

Here’s the good news – the in’s and out’s of your agreement with your influencer is not required so your business dealings are left private, with the only identification required by the AANA being a humble hashtag.

The AANA Clearly Distinguishable Advertising Best Practice Guideline requires that “advertising or marketing communication must be clearly distinguishable” from surrounding content and make sure they “do not camouflage the fact that it is advertising”.

If the following two criteria are met, the advertisement falls under the laws:
Does the marketer have a reasonable degree of control over the material?; and
Does the material draw the attention of the public in a manner calculated to promote a product or service.

So, if a brand advises an influencer of “key messaging” to be included in a particular post, they’ll fall under these guidelines. But, if they provide no guidance on messaging or image style, then the brand (marketer) doesn’t have control.

In regards to payment the guidance states that “the codes apply equally where other arrangements have been made in place of direct payment”. Meaning that free product exchanges, or non-cash deals are also included within the provisions – watch out food bloggers!

As we mentioned earlier, to comply with the new laws, one way influencers can disclose the arrangement is to use the hashtag “#ad”, or “#sponsored”.

Interestingly, native advertising content that is more informative rather than brand biased, and product placements on television do not need to be labelled – lucky you! 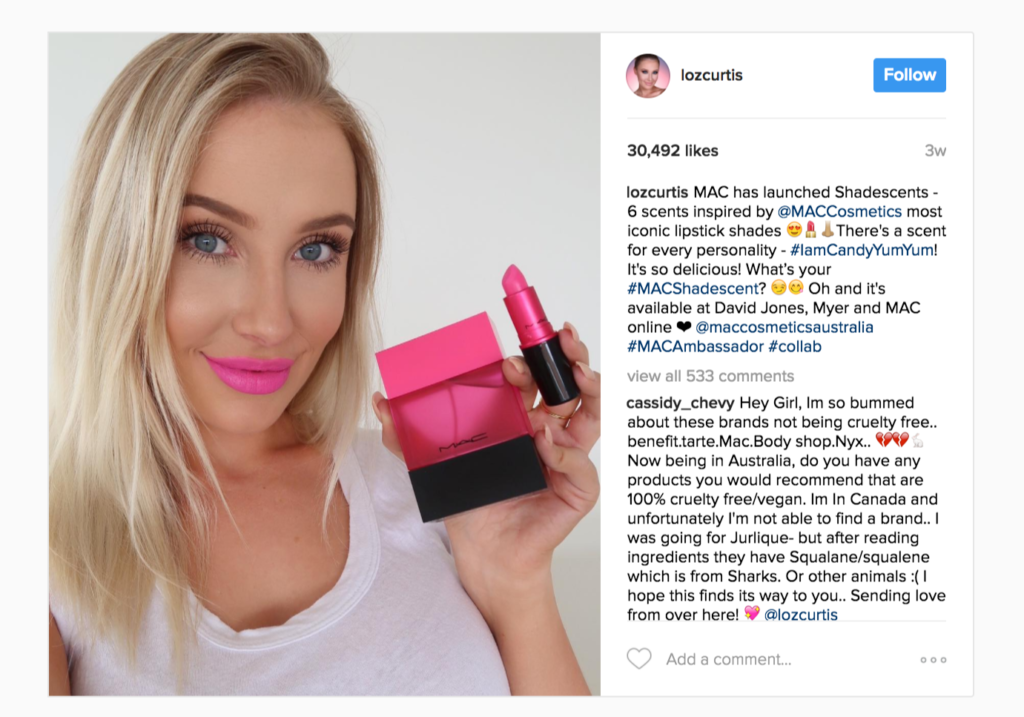 Why only introduce them now?

The new laws have many advertising skeptics asking, why only introduce the laws now? Why not sooner, especially since in the US and the UK influencers are required by law to disclose a sponsored post and have been since 2015?

And we agree, the laws are well and truly overdue. But as with all new rules and regulations, it takes a few controversial cases to really get things rolling. This new move comes in the wake of a few industry-wide concerns and changes.

Many of us are aware of the Australia Post scandal in December 2014 where the company was caught out paying Instagrammers for endorsements. And of course, who could forget the infamous South Australian Tourist Commission, who was outdated by ABC’s Media Watch in 2012 for paying influencers, including Aussie chef Matt Moran to tweet about their trip to Kangaroo Island.

The issue isn’t just that these commercial relationships aren’t being disclosed, but it’s that these influencers are being offered goods or paid sizeable sums to promote these brands. The new rules are partly a reflection of the sheer amount of money that’s flowing through Instagram, Facebook and Twitter. In late 2014 we saw internet celeb, Essena O’Neill, have her show stopping breakdown where she revealed being paid thousands for posts to her 600k followers – and most of the time, her followers didn’t even know!

Even further, Jules Lund, creator of the influencer engagement app, Tribe, made a significant point when he said that brands are reverting back “to social media not socialite media”, referring of course to that first wave of influencer marketing where celebrities dominated the influencer scene and were raking in huge amounts of cash. Now that there are ‘micro-influencers’ on the scene, it’s not as easy to identify who’s being paid and who isn’t.

The new laws will ensure that consumers are conscious that whilst their local foodie may not have the following of say, Kylie Jenner, they’re still following the same commercial relationship practice and getting paid to post.

How to stay out of trouble

Breaking these AANA codes won’t deliver a huge penalty as it’s a self-regulating association and following the rules is actually completely voluntary. If you are reported, the Advertising Standards Board (ASB) can ask for an ad to be taken down. The real risk here is potential prosecution by the Australian Competition and Consumer Commission (ACCC) for breach of Australian Consumer Law (ACL).

Now, before you panic, there hasn’t been any legal cases against media influencers yet. But since many of these social influencers aren’t actually across ACL, it could indeed happen in the near future. And breaching of the ACL is not something to take lightly – carrying a maximum fine of $220k per post for an influencer, and $1.1m for a brand.

So how can you ensure that you aren’t penalised, either as a marketer or influencer? The most simple answer: disclose and label your posts. Don’t risk beating around the bush with this one. If you’re working with an influencer, ensure that they’re up to speed with the laws. Fortunately, the new guidelines offer a range of scenarios to advise us of how the ads might be place and how they can be labelled – you can find them here.

How will these laws affect my business and customers?

Unless you get caught out for not exhibiting best practice, the code shouldn’t really have a significant impact on your business. You’ll still be able to utilise those brand influencers who you have agreements with – it’s just that you have a new set of guidelines to be wary of.

Don’t let this new guide discourage you from using brand influencers as part of your marketing strategy, either. The code does exactly as it says – delivers a guide on best practice. If anything, these laws are benefiting all parties – by encouraging the greater media community to consider influencers as legitimate marketing channels, by allowing brands to continue to reach out to potential influencers, and by empowering the consumer by encouraging complete honesty and transparency regarding commercial connections. It’s a win win really!